The Rampur Greyhound is a breed of dogs native to the Rampur region of Northern India, a member of the large sighthound family; it is often described as a smooth haired sighthound. The favored hound of the Maharajahs for jackal control, this breed has been used to hunt lions, tigers, leopards and panthers as well. The breed is able to hunt at longer distances with high speed; thus capable of great endurance. It is affectionate towards its owner and thrives on companionship. The breed may appear lazy at times, but it can be exceptionally boisterous during play. The Rampur Greyhound is a dominating breed and generally very protective of its family and property. It needs plenty of space and activities for its physical and mental stimulation. Slightly demanding in socialization, it needs firm training from its master. It is good with older children, may get aggressive to other dogs and has low tolerance for non-canine pets at home. The dog is either kept leashed or in a fenced yard, apartment living is not suited.

The Rampur Greyhound is a large dog of 26-30 inches in height with an average weight of 60 to 65 pounds. Its build is similar to that of a typical Greyhound like Rhodesian ridgeback, rectangular in shape, being longer in length than in height, but with good deal of fleshy substance, wider and more muscular. Its head is massive with flat skull and pointing nose. The ears are set high and tail is curled over back usually kept low. Its feet are hare-like and webbed but flexibility of toes gives it cat-like balance. The Rampur Greyhound has a short and smooth coat which can be black, mouse-gray, grizzle, brindle, or parti-color. The colors blend completely with the foliage of the forest, giving a natural camouflage as perfect as when the hound are still, you may not see them from a distance of as little as ten feet in broad daylight. Its eyes can be yellow to golden brown. Gait is free, flawless and slightly sharp with good reach and drive. The overall expression is a massive, deter able but alert dog. Its bite is extremely powerful.

The Rampur Greyhound is a sighthound developed by His Royal Highness Ahmed Ali Khan Bahadur in the Rampur region of Northern India. Famous for jackal control, it was an ideal hunter of lions, tigers, leopards, panthers, and wild boar. Combining blood lines from the Tazi, an Afghan breed and the English Greyhound, this dog possesses great speed, strength and stamina. With an eventual decline of hunting in India, the breed began to disappear; it currently balances on the fine line of extinction. Very less is known outside India, currently only a handful of Rampur Greyhounds are known or registered in other parts of the world. More realistically the rural villagers of the native country cannot really afford to keep such a large dog with excessive requirements. The English greyhound was bred into some of the lines, making it very difficult to find a purebred Rampur Greyhound today. However, in recent years, its popularity has risen especially in United States but still rare. 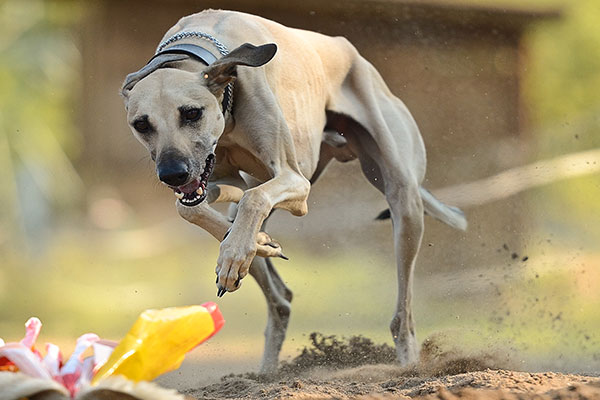 The breed loves human companionship, and is well adjusted to other dogs if raised together from puppyhood. It has clean habits, stays tidy and dirt free. They may appear lazy but will charge if revoked. The Rampur in play is a scary thing, it gets too boisterous, it may damage young kids if not supervised. They like to challenge each other in speed and endurance. They are affectionate to their owners, energetic playmate of children and excellent guard-dog. It is fiercely protective of its family, although it tends to be a one-person dog and will usually obey only one master. Within family circles, especially with children, it is dependably gentle and sensitive.

The dog is furious with strange dogs and gets into fight very quickly. It is much important to plan your pet inventory; the Rampur is a better dog when it is along dog in the house. Being sensitive to scents and hunting drive, this breed is not trusted with small furry, non-canine and other small pets. They are not advised off leashed in public places, it is stressed to keep leashed and hold lead in the hand when walking with them.

Very energetic and boisterous, they should not be left unsatisfied. Extensive physical and mental exercises on daily basis are mandatory for their physical and mental stimulation. Long walks, running competitions, jogging and various play sessions are to be planed to keep them engaged, off-course such activities would require more space, more facilities, more time, more money and your company. All such factors make them a costly breed to maintain.

The Rampur is self-sufficient, highly dominating, independent, yet courageous and fearless breed. Tough to handler and demanding in socialization training, they demand well experienced, confident, consistent and committed owner with higher degrees of tolerance. The man should act as pack leader and should always keep the dog in natural pack order to ensure effective control on them. As a general rule, never try harsh methods for training but polite, interactive and reward based sessions are more fruitful. The breed is average shedder, while easy to groom, brushing once in a week is considered satisfactory.